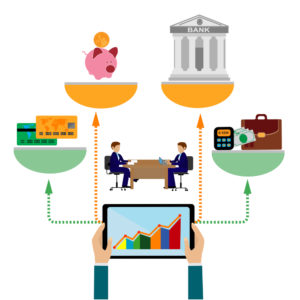 No­wa­days, one of the main glo­bal prob­lems is the avai­la­bi­li­ty of com­pre­hen­sive ac­cess to fi­nan­cial services. This interest is primarily due to the fact that the availability of payment services reduces the cost of paying for goods and services, and has become a determining factor for the transparency of transactions.

All innovations carried out over the past several decades have not changed the existing order, but only made some adjustments to the use of existing payment systems. An example is the conventional debit cards which originally involved payments between parties on a marketplace.

Now they are used for online shopping. Integration from personal transactions to remote transactions has become the reason for various fraudulent actions in response to which more stringent security measures have been created: confirmation of payments in a way available to the user is an example.

The current situation in Europe has become an impetus for the development of its own European payment system which will replace the well-known VISA and Mastercard. About 20 Eurobanks are involved in the project, and the preliminary name of the system is the Pan-European Payment System Initiative.

One of the reasons for this step is the political aspect. It coincides with the ECB’s views on the independence of payments in European countries, a matter which has been of concern to the financial institution since 2017.

Until recently, there were only rumours about the development of PEPSI, but in early July 2020, a group of 16 banks officially announced plans to implement the EPI. The new scheme will be based on TIPS which the ECB launched in 2018.

In terms of sponsorship, the project is sponsored by some French, Spanish, Italian and German banks.

What is the essence of PEPSI?

It will be a payment system operating according to the new European standards that bypass VISA and Mastercard which belong to the United States. Users will be able to pay by cards, money, instant and mobile transfers.

Currently, a group of the largest banks in Europe has already started the project. The priority of the new service is instant P2P transfers, payments in retail outlets, withdrawals from ATMs, and international payments.

The introduction of a unified European system will eliminate the problem of fragmentation of retail payments which are present in Europe. The plan is to cover all countries using the euro, and then the rest of the EU.

It should be noted that Europe is not the first initiator of such decisions. For example, the Russian payment system, Mir, which bypasses American services, has long been working. While it occupies a small part of the market, it is already valid in 7 countries. In the future, it is assumed that MIR cards will be used for payments in 12 countries of the world.

This example makes it clear that abandoning international systems is a political decision that provides for the security of countries that have joined the new project. This will help to reduce the pressure from external sanctions and build sovereignty from the US financial systems.