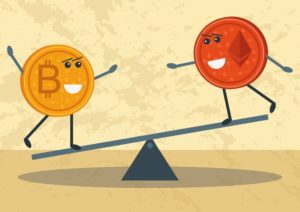 In 20­21, Ethe­re­um may be­come more pro­fi­table than Bit­coin, and its price could rise to ten thou­sand dollars. This opinion was said by the host of the podcast The Wolf Of All Streets and crypto trader Scott Melker in an interview with Cointelegraph.

According to a professional trader, the current stage of strengthening the value of bitcoin is optimistic and has a positive effect on the rate of the second most profitable cryptocurrency, Ethereum.

According to Melker, the productivity and potential of Ethereum have become an important catalyst for the growth of the altcoin market (cryptocurrencies launched after the success of bitcoin).

The trading veteran noted that in recent months he has significantly switched his strategy from Bitcoin to Ethereum due to the growth of its capabilities and resources. This policy reminded Scott Melker of the investment on the Internet in the early nineties.

The expert does not consider his assumptions insane and ill-considered, recalling that Bitcoin has almost tripled in price, while Ethereum has grown five times over the past year.

In the latest report, Kraken exchange analysts predicted the growth of bitcoin to $ 90,000 and also determined that the profitability of Ethereum will exceed the bitcoin rate and reach $ 15,000 or more. Anthony Scaramucci, founder and managing partner of the investment company SkyBridge Capital, agrees with the growth estimates of the second cryptocurrency after bitcoin.

In three months of this year, the value of Bitcoin has risen to almost 103%, which is the best result since 2013. Over the same period, Ethereum’s profitability has increased by more than 250%.

Remember that it is possible to transfer and receive money quickly all over the world through the ecoPayz payment system. After registering in the system, join the VipDeposits loyalty program and receive Gold status for free and forever. ecoPayz is a convenient wallet on your phone anywhere and anytime!